Traditional Chinese medicine (TCM) is one of main form complementary and alternative medicine, including Chinese herbal medicine (CHM), acupuncture and other non-medication therapies. In China, the important characteristic of China’s national medical system is that TCM and western medicine (WM) complement and cooperate with each other, being responsible together for the health care of Chinese people.
According to traditional Chinese medicine, the vision for multiple sclerosis is believed that the disease process most likely originates with a combination of spiritual and emotional factors and that the “trigger” for the disease may be an experience of a feverish illness, usually an infectious disease.  The weakening of and loss of control over the musculature may come about because the critical energizing and regulating functions of the internal organs have become disturbed due to the loss of spiritual focus, perhaps because of a frightful experience which has “scattered one’s soul from its resting place.”  The triggering disease consumes vital fluid essences that are essential to nourishing the body and providing a relaxing medium for the spirit.  Without spiritual relaxation, there is ongoing agitation and destruction of bodily harmony.
Chinese Medicine generally considers Multiple Sclerosis as a type of Atrophy Syndrome that is typically characterized by a general weakness of the body with emphasis on the Functional Energetic Deficiency of the Liver and Kidneys.
Clinical manifestations of Liver Blood Deficiency are a muscular weakness in the arms and legs, dizziness, vertigo, numbness of the limbs, pale complexion, insomnia with dream disturbed sleep, muscle cramps and vision problems.
Clinical manifestations of Kidney Deficiency are Weakness in the back and knees, lower back ache, poor memory, urination problems, cold limbs, and insomnia.
In addition to Liver Blood and Kidney Deficiency, MS is often characterized in Chinese medical terms as Damp Invasion of the Spleen and meridians. This represents a malfunction of the digestive system.
Clinical manifestations of Spleen Dampness are Numbness and tingling sensations, feeling of heaviness in the limbs, fatigue, bloating in the abdomen.
There have been several randomized controlled trials (RCT) to evaluate the efficacy and safety of CHMs for MS.


Following the two recently published, systematic reviews on the application of traditional Chinese medicine in patients with multiple sclerosis, the first related to the use of Chinese herbal therapy in patients with acute relapsing of multiple sclerosis and the other on the Effect of Tai Chi on physical and psychosocial function.
Complement Ther Med. 2017 Apr;31:71-81. doi: 10.1016/j.ctim.2017.02.004. Epub 2017 Feb 21.

Many patients with multiple sclerosis (MS) resort to complementary and alternative medicine, which is used in 33%-80% of MS patients in the developed country. The purpose of this study is to assess the efficacy and safety of Chinese herbal medicine (CHM) as an adjunct therapy of patients with acute relapse of MS.

Six databases were searched for randomized-controlled trial of CHM for acute relapse of MS. The risk of bias was assessed by using the twelve criteria recommended by the Cochrane Back Review Group. The primary outcome measures of interest are the Expanded Disability Status Score, annual relapse frequency, annual relapse rate, and annual relapse interval. The secondary outcome measures are the clinical efficacy rate and adverse events. The selection criteria of high-frequency herbs for MS are those with cumulative frequency over 50%. We analyzed the data using Review Manager (version 5.3).

A total of 1100 participants were included in the 20 studies from 2004 to 2015. The number of risk of bias which met the criteria varied from 5/12 to 7/12. The top 5 most frequently used herbs are ordinally Radix Angelicae Sinensis, Radix Glycyrrhizae, Radix Paeoniae Rubra, Radix Rehmanniae Preparata, and Bombyx Batryticatus. The meta-analysis showed a significant effect of CHM for improving Expanded Disability Status Score (P<0.01), annual relapse frequency (P<0.01) and the total clinical efficacy rate (P<0.01) compared with western conventional treatment. In the analysis of annual relapse rate and annual relapse interval, there was a significant difference between CHMs and western conventional treatment (P<0.01). Adverse effects were monitored in 6 studies, and were well tolerated in all MS patients.

The available evidence from present study supported but limited to recommend the routine use of CHM adjuvant therapy for MS because of the poor methodological quality and clinical heterogeneity. However, we identified an area that is worthy of further study. Furthermore, we selected high frequent use of CHMs as a promising candidate for further clinical application and MS trials. Further rigorous randomized-controlled trials are needed.

In this work there are many bias, of the only 5 trials reported the method of random sequences generation, with data that could be useful in statistical reason, the search for them is not facilitated by the bibliography provided by the authors of this review. There are no double-blind studies, no data on withdrawals, a wide heterogeneity in the CHMs among the included studies because CHMs are composed of more than one herb and produce different therapeutic effects with different concentration proportions of the constituents.

The effects of Tai Chi on physical and psychosocial function among persons with multiple sclerosis: A systematic review.

Conduct a systematic review to evaluate the effects of Tai Chi on physical and psychosocial function among individuals with Multiple Sclerosis.

A total of 91 articles were retrieved, with 3 additional articles identified through reviewing bibliographies of relevant articles. A total of 8 studies (randomized controlled trials, n=3; quasi-experimental, n=5) enrolled 193 participants with Multiple Sclerosis. Studies were conducted in the USA (n=3), Europe (n=3), Iran, (n=1), and India (n=1). A total of 3 studies reported using the Yang style of Tai Chi (not specified, n=5 studies). The Tai Chi intervention averaged 27 sessions over 11 weeks. Study quality scores for the randomized controlled trials had a mean score of 23 (range 19-26), while quality scores for quasi-experimental studies had a mean score of 20 (range 13-26). Overall, participants enrolled in Tai Chi had better balance, gait and flexibility, less fatigue and depression, and better quality of life after the intervention; though mixed results were reported.

One of the challenges with this review is that these studies used different styles of Tai Chi, and offered various session durations as well as length of the interventions making comparisons across studies difficult.
The quality of the studies are low, not describe in many of them de EDSS scale , the sample sizes were small with only one study providing details of a power analysis to determine sample size, likely impacting the results reported.
Highlights
Despite quality scores for the studies, the results indicate that Tai Chi is likely safe and may provide benefits. Collectively, the studies reported statistically significant improvements in balance, gait, flexibility, fatigue, depression, and quality of life. These findings offer a promising alternative for MS symptom management with the use of Tai Chi. 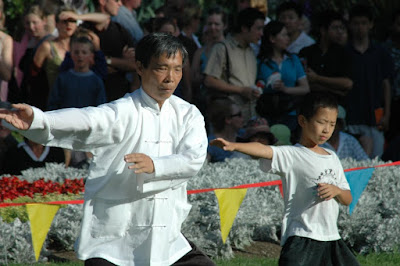 The effects of Tai Chi on physical and psychosocial function among persons with multiple sclerosis: A systematic review.